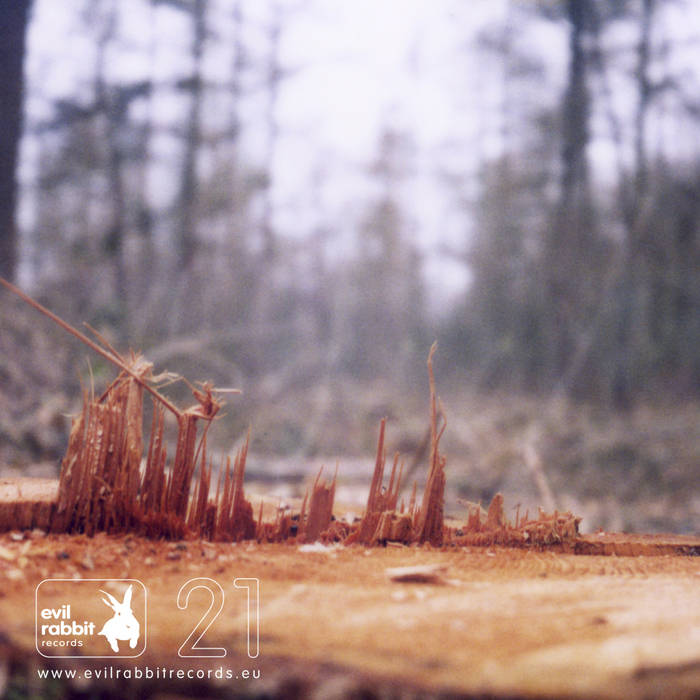 After having played together in various duo and trio settings, the four Berlin based bassists Antonio Borghini, Meinrad Kneer, Miles Perkin and Klaus Kürvers formed this quartet in March 2011. Improvising freely we have developed a unique ensemble sound based on the individual personalities utilizing the many sound possibilities of the unamplified basses.
The 8 pieces on this CD are collectively and spontaneously composed string quartets, 'soundscapes', memorized images. Everyday scenarios inspire the structures and sound textures, which we interpret simultaneously and independently.
Memories of lifts & escalators gliding between the floors of a department store ("Lifts & Escalators"), of paddle steamers, steam locomotives, windmills & printing presses; squeaking, rattling, groaning wheels turning in a rusty factory ("Rotations"), of the tense calm of a swarm of crows resting in the creeking branches of a tree ("Resting Crows") or of a dark night in a tent between railway tracks, motorway and the sea ("Passing By").
There are also pieces based on abstract musical structures. Both "Interludes" are polymetrical superimpositions of 3/4, 4/4, 5/4 and 7/4 bars, played at the same tempo and in the same scale resulting in shifting melodies and timbres. Or the extremely quiet landscape created by examining where silence becomes sound and vice versa, which we called "Inside".
"Birdcages" is a combination of everyday imagery and abstract musical structure: Each bassist is restricted to 3 pitches (octaves may be changed freely), which together cover the 12 notes in the chromatic scale. In the beginning various 12-tone rows are developed by following simple patterns. The natural overtones, which constitute the end of the piece result from the fact, that each bassist has an open string as one of his three pitches. The image that we use in this piece is that of four birdcages in each of which a bird is hopping between its three perches.
Rather than being programmatic music, we see our music as that of an imaginary film, music which can be enjoyed purely on its own abstract terms as well as inviting the listener to freely associate his or her own images.

Recorded by Roy Carroll, May 31, 2012
at Studio Boerne 45, Berlin, Germany
Mixed and mastered by Miles Perkin